I had left off the last post leading into the next set of exploration that would happen in our old stomping grounds, Bhagalpur.  The once thriving silk town in North Eastern India has seen quite a bit of changes in the past few years.

The overnight train journey from Muzaffarpur to Bhagalpur was a very cold and uncomfortable one as we forgot to pack blankets and sheets for this particular ride where it was a sleeper class train!  We arrived into Bhagalpur in the wee hours of the morning when this otherwise chaotic city was still asleep.

The rest of the day was spent exploring our old weaver clusters to see what kind of current work was being done and what the current status was.  To our dismay and alarm, we found that the number in handloom weavers had drastically declined in the past 4 years or so. 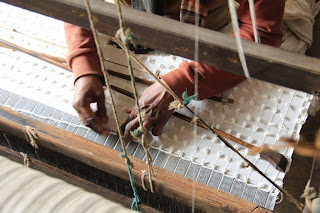 Due to the cost efficiency in production, more handloom weavers have either shifted to powerlooms or have quit their trade!  The ones that are left behind, a handfull 15-20, are highly skilled, slightly aged individuals, who still love to work on exquisite weaves at their handlooms but desperately need work!  The availability of cheaper and inferior quality textile products from China has caused a huge dent in this industry! 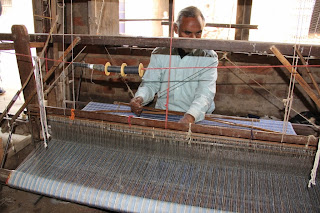 This image stuck in my head and I felt that unless we, as Designers, Producers, Retailers, don't wake up and take notice in a collaborative manner, this ancient and amazing art of weaving in North Eastern India will soon be extinct. 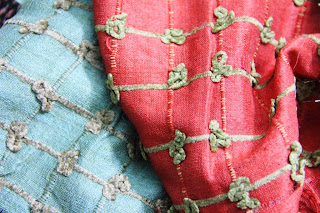 It was refershing to visit another village where the artisans seemed to be thriving and were prosperous.  The key was demand for Tussar and Gicha silk sarees from Bengal and some other parts of Northern India.  They had enough work and it was relatively less complicated of a weave so it was cost effective for them to continue their work. 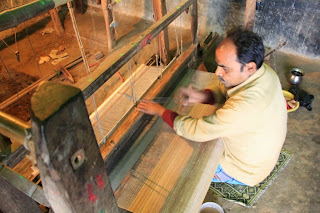 A visit to the ancient ruins of one of the seats of knowledge, Vikramsila University, ended our trip on a pleasnt note.  However, it made me more aware of the current situation in handloom weaving and unless more of us, Producers and Consumers, collaboratively support this initiative, we will have lost another exquisite art! 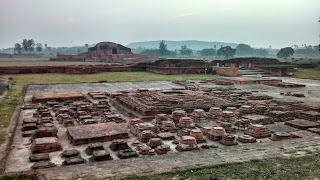