I woke up filled with excitement as I was going to ride a camel for the first time today and also explore the Golden Fort of Jaisalmer!  The owners of our boutique hotel, Pol Haveli, are two brothers, Anna and Manu.  They were more than happy to arrange for a customized camel safari for us since we were pressed for time and couldn’t avail of the usual sunrise or sunset safaris.  People can also spend the night on the dunes in very comfortable tents while enjoying local music and dance and a sumptuous Rajasthani meal. We decided to leave that for a future trip.

After a fantastic breakfast of masala omelets, cheese toasts with flavourful tea and a fabulous view of the fort from the rooftop restaurant, we left for the dunes of the Thar desert in a covered jeep.   The road took us through dusty and desolate desert landscape, where we spotted an occasional camel loitering or feeding from the local vegetation.  After about a half hour drive, we reached a small Rajput village of only a few 100 inhabitants.  The houses were small and humble, built from the yellow sandstone available locally.

Our camels were ready for us and the guide instructed us to follow the method of “boarding” a camel.  I climbed up onto the back of the animal and settled in before the camel was instructed to get up.  This was a weird feeling as I had to lean back when the camel was getting up and lean forward subsequently to keep my balance.  We started our trip down the sandy path that led us to the dunes of the desert.

I have had the pleasure of riding on an elephant many times in the wildlife sanctuaries of India but this was a unique experience in itself!  At times, I had to shift my weight to make sure I was balanced properly for fear of falling off the animal’s back.  Once on the dunes, we got off to walk through the sand a little bit and it was a great feeling!  The sand was soft under my feet and so smooth.  I felt that a little sand-slide was required to pay tribute to this beautiful element of nature and threw myself down one of the sand slopes!  Yes, it was fantastic and I highly recommend this to all!  I could only imagine how gorgeous it would be to see the dunes during sunset.
After some more camel riding and camel racing, we decide we needed to return to Jaisalmer as the Golden Fort was still to be explored.  Once at the fort, we were approached by a very endearing and persuasive guide called Hasmukh, who wouldn’t take no for an answer and for a mere Rs. 70 ($1.55), I thought it would be worth our while to humour him.  Hasmukh was quite fluent in conversational English as he dealt with foreign tourist all the time and told us that the fort was built 900 years ago and about 4000 people still resided within the boundaries of the fort.

The King’s palace was a gorgeous piece of architecture but smaller in size compared to other palaces in Rajasthan.  The cobble stoned paths led us to a high point in the fort from where one could see the city around us that did look like a golden city made of the yellow sandstone.
I needed to pick up a few souvenirs made from the fabled yellow sandstone.  Hasmukh took me to a store called Light of The East whose owner was originally from Calcutta! He had moved to Jaisalmer after watching the Ray movie, Shonar Kella and having fallen in love with this enchanting desert city!  His store had a lovely collection of unique stones, gemstones, crystals, etc.

After I’d had enough of the charms of the Golden Fort and it’s architecture, we began our journey towards Jaipur where we would spend the night before heading for Delhi to catch my flight back to Vancouver.

We left the Blue City of Jodhpur behind us and set off down the dusty desert roads for Jaisalmer, the city of the Golden Fort (Shonar Kella popularized by the movie with the same name made by Oscar winning filmmaker Satyajit Ray).  It was a 330km journey and judging by our past driving experience, we didn't expect to get there until 9 or 10pm.

Before leaving Jodhpur, our wonderful chauffeur, Nitin, made sure that Canadian (crazy) Madam didn't miss the famous Mirchi Vara and kachoris of Jodhpur.  These Mirchi Varas are delicious and not for the mild at heart! It's literally a hot pepper coated with a spicy potato and oinion mash with a breadcrumb exterior that is deep fried.  It tastes divine! We grabbed a box of sweets for the long ride and were on our way.

Lunch wasn't a "fancy restaurant" experience but around 4:00pm we stopped at a roadside "dhaba" or Indian fast food shack.  The charpoys (vinyl and aluminium multi-purpose sitting/sleeping furniture) were laid out and wooden blocks were placed strategically to form make-shift tables.  We met an adorable little boy of maybe 9 or 10, whose name was Salim.  He could recite the menu in one breath and if stopped in between, would resume from the start!

After asking him, I learnt of a very interesting arrangement in Salim's family, that came about based on economic needs and reality of their situation.  Salim doesn't go to school but earns Rs. 2000 each month by working at the Dhaba. His older brother goes to school and comes home and teaches him what he has learned.  This way, Salim supports the family and is somewhat being educated.  What an interesting arrangement, I thought!  So much reality for a 9 or 10 year old boy, who didn't stop smiling and serving the best rotis I've ever had!

The journey to Jaisalmer took us through more dry and open lands of Rajasthan.  We saw a lot of windmills that had been installed all over the desert areas.  At about 9:30p.m. we finally reached Jaisalmer.  The hotel we stayed in had an amazing view of the Golden Fort from the rooftop restaurant.  It looked dreamy and called out to me to come and explore it's narrow alleyways.


After a delicious dinner of kaju curry, gatta, and egg curry, sleep was next on the agenda before I embarked upon the next adventure, camel safari in the Thar Desert and exploration of the Golden Fort!

The morning came in our lovely Polo Heritage hotel (http://www.poloheritage.com/) with birds chirping in the lawn and soft sounds of the hotel getting ready for the day ahead.  I didn't get a chance to explore the hotel and its grounds the night before so I took the opportunity to do so in the morning.  Jodhpur is a city of art and culture as that was evident in the smallest details around me.  The huge room with its 20ft ceilings and locally made colonial furniture and beautiful marble floors in the bathroom, all added to the charm of this beautifully appointed heritage hotel.

After a fantastic breakfast of upma and tea, we headed for Umaid Bhawan Palace, the home of the royal family of Jodhpur and a luxury hotel as well.  The view from the top of the hill was breathtaking and as we walked up the path to the museum section of the palace, I admired the grounds and the amazing architecture of the palace.  Inside, we saw some select objects that were collectibles of the royal family.  To this day, even if monarchy doesn't truly exist in India, but the royal families in Rajasthan still hold the respect of the people.

Once we enjoyed the royal hospitality, we decided to head to another area of historic and architectural beauty, the Mehrangarh Fort, which rises majestically from the hills around Jodhpur and offers a fabulous view of the old city of blue around it.  I loved these blue houses!  The fort itself was a gorgeous piece of architecture with so many stories to tell. 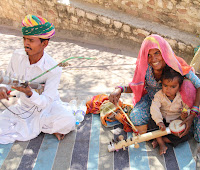 After taking in the views we headed for the desert city of Jaisalmer and the Golden Fort (Shonar Kella). some 330kms away from Jodhpur. 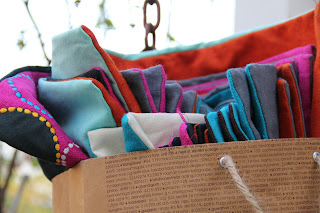 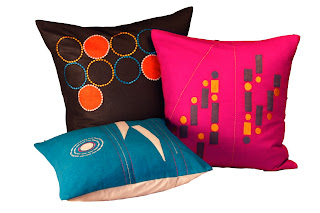 Our new collection is now available and we're very excited to offer our discerning clientele an assortment of vibrant colors that are sure to bring Spring and Summer to their homes.

We designed the collection based on three concepts - Jewels, Inequality, and Escape.  Three distinct yet synchronized concepts that are tied together by hues and craftsmanship details.  Hope you find a place for Rajboori SS11 in your homes.