Mystical Machu Picchu and Colors of the Andes - Salkantay trail

The morning we began our 3 day trek on the Salkantay trail to finally arrive at Machu Picchu, started before dawn.  Our guide, Celso, came to pick us up.  We started off with  a 2hr drive to Mollepata, the starting point for the trail.  Given we had only 3 days to complete the trek, a 5 day trip was scaled down to (quite ambitiously I must add) a 3 day trek!

Once we bid farewell to our driver, Cocoliso, and met our horseman, Jose, who had already loaded up the three horses with the luggage, we started the trek.  The scenery was breathtaking, with soaring peaks of Salkantay and Umantay reaching for the cloudless, blue sky and the meandering streams flowing through the valley we walked through.  On Day 1 we had to climb up to 4600m to the summit of Salkantay pass, which was about 4km, and then trek down another 7km to reach our campground for the night.

Both of us are pretty active people and Subrata even runs marathons, so we didn't think it would be that big of a deal to accomplish this task.  Well, altitude is an element we didn't take too much into account when we set out.  Given, we didn't have much time to acclimatize before the trek, it hit us and more so, me, like a ton of bricks!  Not so steep elevations started proving to be a mammoth endeavor!  Our guide, Celso, who turned out to be quite the entertainer, started cheering up the breathless Senorita with little stories and funny antics!

Anyway, after an arduous task, we reached the summit, not without stopping in between for a fabulous lunch prepared by Jose and Marcelino, who had trekked up faster than us and prepared a delicious, hot meal!  The mountain dwellers breathe effortlessly at such high altitudes and apparently have trouble when they get down to sea level!

The views we saw during the climb up, the solitude of the mountains, the crispness in the air, and the feeling of elation after accomplishing what we had set out to, was unparalleled.  The trek ended on Day 1 at a makeshift campground which was very "natural" in all sense of the word.  Yes, no bathrooms, only amazingly beautiful natural settings!  Our tents were set up behind a shed owned by a local farmer and a warm dinner was awaiting us.  A sudden deluge greeted us that night and we feared the trail would be absolutely muddy, slippery and wet the next day, where we had to trek about 17km to La Plata campsite!  Needless to say, neither of us went to sleep in peace that night!

The rain had stopped at some point that night and we woke up to a morning that was nothing but magical!  Nestled between mountains and Peruvian rainforests, this little makeshift campsite seemed like a little gem.  The moon was glistening on the Western sky and the crimson in the Eastern sky announced the rising sun.  With a cheerful heart and very reliable hiking boots on our feet, Celso led us on the trek for Day 2, shouting "Vamos chicos, vamos la Plata!"

We hiked down rocky terrain, over streams, through lush rainforests, indigenous communities and gorgeous views of the mountains.  It was great to get a local flavor of how the people lived in those remote areas.  The horsemen were so fast on their feet, negotiating the rugged terrain and reaching their destinations on time even though they were miles away!

Day 2 ended after a hard 17km trek, at La Plata campsite, which had proper facilities!  Our tent had already been set up and rest was all we could think of, not before a quick drive to Santa Teresa's hot springs to soothe our tortured muscles!

Day 3 started early but not like the ones before as only Subrata and Celso would go for a half day trek to meet Marcelino and me at Hydroelectric station, from where we would catch the train for Aguas Calientes.  The plan was to take the 30min bus ride to Machu Picchu from Aguas Calientes very early on Day 4.  Since we didn't have much time on our hands, we decided we didn't need to actually hike up to see Machu Picchu, especially, after what we endured on the Salkantay trail!

After being treated to a surprise birthday cake at 6:30 a.m., prepared for the Senorita by our amazing chef, Marcelino, I decided this was going to be a fun birthday after all!  Subrata and Celso headed out and after a while Marcelino and I packed up and boarded a van with about 15 other tourists, guides, locals and even one braveheart on the roof!  This precariously loaded ensemble of people and luggage started making its way up and down the mountainous roads of Peru.  At one point, when giving way to an oncoming truck, our driver, who looked like he could be 16 years old, backed up so fast, that we almost went off the cliff!  My heart pounding hard and hoping not to die on my birthday, I prayed that we all reached our destination safely. The roads of Peruvian mountains need much work and some recent flooding of the Urubamba river had caused much destruction, which is still being reconstructed. 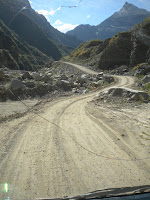 We reached Aguas Calientes after a wonderful train journey through rainforests, mountains, and the Urubamba riverside.  A more tourist-centered town probably could not be found!  We rested to wake up at 4:30a.m. to stand in line to be the first ones to catch the bus to see Machu Picchu when the first rays of the sun would sweep through these remote and mystical ruins.

Mystical Machu Picchu and colors of the Andes - Cusco

This past August, my husband, Subrata and I decided to go on an adventure in South America and it would also be a sourcing trip for Rajboori as I am increasingly seeking out global inspirations and sources to enrich our offerings.  Our key destinations were Machu Picchu, Patagonia and Atacama desert, with cities like Valpariaso, Cusco and Buenos Aires thrown into the mix to offer some cosmopolitan, historical and cultural flavor and reprise from wilderness living.

After a day's journey from Vancouver, we reached Lima in the late evening.  The airport was our "hotel" that night as we had a flight to the high altitude historical city of Cusco in the early hours of the morning.  A few espresso shots at the Starbucks in Lima airport kept us awake that night.We reached Cusco in the early hours of the morning as the city was just waking up.  The cool, crisp mountain air greeted us. Upon our arrival at the hotel, we were offered coca leaves, either to be chewed like the locals did or consumed as tea. I opted for coca-tea and Subrata went straight for the chewing option, hoping to drive off any remote chances of getting altitude sickness.  Our 4 day trek to Machu Picchu on the Salkantay trail would begin from the next day.

Cusco is a beautiful city nestled in the Andean mountains, built primarily in Spanish architecture as most of the original Inca architecture had been destroyed during the Spanish invasion and occupation.  The alleys of Cusco were filled with sometimes enticing and sometimes strong smells of various indigenous food being cooked, out of which fried pork seemed to be prevalent and a favorite among most locals and some tourists. Cuy or guinea pig was a delicacy offered in most restaurants.
Now, I had to check out the amazing textile products I had been noticing since we had landed.  The alpaca looked exquisite and a few upscale boutiques had the most beautiful and luxurious collection of shawls, scarves, and sweaters made from royal alpaca and vicuna wool.  But I wanted to find something that was more Peruvian or Andean inspired and certainly more artisanal.  So, off we went to visit the textile center in Cusco. This center is run by Nilda, who does inspirational work with the local artisans and they offer home textiles and some apparel in the center for purchase.  There's also a very informative museum that illustrates how the art of weaving Andean textiles takes place and what ingredients/techniques are used to make these colorful items. 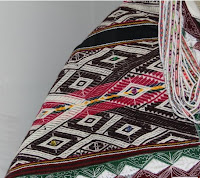 I was amazed to see the similarity of design patterns, style of weaving and the type of looms used by these artisan women and the ones that I have seen in North Eastern India!  Did exchange of ideas and skills take place between the tribal artisan women of Peru and NE India at some point in history?  If so, wouldn't it be great if we could revive that cultural exchange through design?  With these thoughts churning in my mind, I went to bed, only to get up at an ungodly hour to leave for the Salkantay trek to ultimately reach our destination, the mystical Machu Picchu.